Cruise ships bring more than 95% of the visitors to Glacier Bay National Park and thus serve as a critical means by which people access and enjoy the park¿s resources.

However, as part of their transit to visit the tidewater glaciers (a park mandate) cruise ship routes overlap with areas 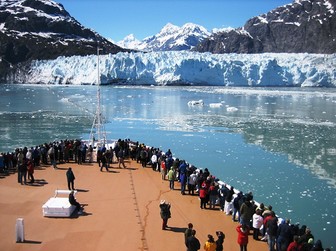 Consequently, ship operators (marine pilots and deck officers) will often encounter surfacing whales during their transit through the park.

Some of those encounters result in lethal collisions with whales (`ship strikes¿) which have been documented to occur both inside the park and in adjacent waters involving whales that regularly use Glacier Bay.

Consequently, reducing the chance of cruise ship-whale collisions is a priority management objective in Glacier Bay.

Cruise ships that enter Glacier Bay are typically commanded by an Alaska state-licensed marine pilot with the rest of the bridge team consisting of company-employed deck officers including the captain, mates, helmsman, and lookouts.

These actions include, among others, transit planning for reduced speeds, narrowing search areas in a `Cone of Concern¿, and initiating maneuvers, including changes in course in response to a sighted whale.

Consequently, inexperienced mariners either disregard the ability to avoid whales or must learn by trial and error during decades on the water.

The objectives for this project are to produce a whale avoidance training curriculum which includes:
1) realistic whale graphic; 2) scripted simulator modules; 3) short video; and 4) train the trainer video.

The curriculum will be focused on whale avoidance for training mariners, including marine pilots and cruise ship deck officers and will use full-mission bridge simulators, with the ultimate goal of reducing the chance of cruise ship-humpback whale lethal collisions.

A ship simulator is, not unlike a flight simulator for aviation pilots, a system that mimics a ship¿s bridge and controls, and has software that mirrors a ship¿s movements and marine environment thereby allowing inexperienced mariners to practice maneuvering a ship in different conditions and for different purposes.

For example, training can focus on docking a large ship.

Graphics would be created on the dimensions of the dock such that and trainees would practice bringing the ship alongside the dock.

The simulator operator would then fold in complexity, such as the presence of another vessel or increased wind and current speed requiring greater skill at bringing the ship to the dock.

For active whale avoidance training, a graphic of a surfacing whale will be generated based on the science of whale behavior (the frequency and nature of the visual cues used by mariners to detect whales and infer their direction of travel such as the spout height, opacity, persistence, etc.).

Script will then be written for the simulator scenarios whereby the trainee encounters a surfacing whale(s) while operating the ship, with scenarios building in complexity (e.g., distance/bearing or certainty of whales direction of travel; proximity to shoals, presence of other vessels, multiple whales surfacing in different areas, etc.).

Curriculum development will be met over the course of three years by partnering with the Southeast Alaska Pilots Association (SEAPA), which includes all pilots that bring ships into Glacier Bay and surrounding waters, the Maritime Pilot¿s Institute (MPI) which provides mariner training programs including to many SEAPA pilots and where cruise deck officers can train, and Locus LLC which is a research and development entity that focuses on development of mariner training programs and training production including scaled models of ships for further refinement of maneuvering techniques.
Related Programs

Is the Social Entrepreneur Sick?

A Safe Haven for the Homeless

Local Organizations Advocate For Increased Voters on the Rolls

Additional Information of Eligibility:
Nonprofit organizations (including tribal nonprofits) are eligible to apply.

All recipients and subrecipients must forgo any profit or management fee.

The Guardian has rounded up expert advice on what social enterprise will look like in the future, specifically in 2020.