To supply both irrigation and municipal and industrial water supply to the Ute Mountain Ute and Southern Ute Indian Tribes from the Animas-La Plata Project in settlement of water rights claims for the Tribes, and also fulfill other project activities that may be required as a result of the construction,
such as relocation of roads and moving power lines.

To complete construction of, and to operate and maintain, a reconfigured Animas-La Plata Project, consisting of facilities to divert and store water from the Animas River to provide for an average annual depletion of 57,100 acre-feet of water, to be used for municipal and industrial water supply only, for the Ute Mountain Ute and Southern Ute Indian Tribes, and other tribal and non-tribal entities in the Four Corners Region of the United States.
Examples of Funded Projects

Since 2002, construction contracts in excess of $211 million have been awarded for the Animas-La Plata Project. Construction on Ridges Basin Dam and pumping plant continued in FY 2005. Excavation for the outlet works tunnel and foundation of the dam and the pumping plant was completed. Construction of 5 of 11 drop structures also was completed. Grouting of the dam foundation is well underway, with placement of dam embankment currently in progress. Placement of concrete for the pumping plant began in 2004 and continues. Final design of components to Navajo Nation Municipal Pipeline and of the inlet conduit is underway. Construction of the entire Animas-La Plata Project is nearly 25 percent complete.

The Bureau of Reclamation is specifically authorized to: (1) Construct, operate and maintain a reservoir, a pumping plant, a reservoir inlet conduit, and appurtenant facilities with sufficient capacity to divert and store water from the Animas River to provide for an average annual depletion of 57,100 acre-feet of water to be used for a municipal and industrial water supply; (2) Meet specific annual depletion rates for water allocation delivery.

The design and construction functions of the Bureau of Reclamation with respect to the Dolores and Animas-LaPlata Projects shall be subject to the provisions of the Indian Self-Determination and Education Assistance Act (ii Stat.

450 et seq.) to the same extent as if such functions were performed by the Bureau of Indian Affairs.

Federally Recognized Indian Tribal Government - Projects shall be subject to the provisions of the Indian Self-Determination and Education Assistance Act (ii Stat.

450 et seq.) to the same extent as if such functions were performed by the Bureau of Indian Affairs; and for projects not awarded subject to Public Law 93-638: State, local, Federally recognized Indian Tribal governments, small businesses, individuals, and profit organizations.

The Bureau of Reclamation is required by Public Law 100-585 to use Public Law 93-638 procedures to contract for construction of the Animas-La Plata Project with the Ute Mountain Ute Tribe and the Southern Ute Indian Tribe. Construction contracts for estimated quantities and with firm fixed unit pricing are issued to accomplish the work. For projects under this program that are not required to be awarded subject to Public Law 93-638, funding opportunity announcements, along with registration procedures, application packages and instructions, SF-424 forms and any other forms to be used to submit application information, points of contact, and procedures for submitting applications will be available on http://www.grants.gov/ .

An initial statement of work is issued to the Tribe for review and pricing by the Contract Specialist. The Tribe reviews the initial statement of work, submits and proposal with an estimate for completion of the work. The proposal with cost estimate is evaluated by the Government Technical Team, the Government Cost and Price Analyst, Contract Specialist, Contract Administrator, and Contracting Officer. Negotiations are held on the various elements until an agreement is reached and an award is then made. For projects not awarded subject to Public Law 93-638, all applications will be initially screened for eligibility and compliance with the requirements stated in the program funding announcement. Applications passing this screening process will be forwarded for review by a proposal evaluation panel comprised of qualified experts in the program area. Applications will be reviewed against the proposal evaluation criteria, and any additional review factors, as stated in the funding announcement. Final selection will be determined by the Commissioner, Bureau of Reclamation, or regional officials, as applicable to the project.

Varies by project. Deadline information will be included in all funding opportunity announcements posted on www.grants.gov.

Varies depending on the type and complexity of the project. Further information will be available for each specific project at the time the funding opportunity announcement is posted on www.grants.gov and may be obtained by contacting the Reclamation personnel listed as the point of contact in the funding announcement.

None. Final award decisions are not subject to appeal; however, the Bureau of Reclamation will provide all applicants with information on why their proposals were not selected for award.

Public Law 93-638 contracts and agreements are written for a specific period of time to complete a project, but normally not over 5 years. Funds are disbursed by progress payments, based on percentage of completion of estimated quantities of work. Section 207, Section 17(b) of the Act as amended extended the project period through Fiscal Year 2012.

Upon completion of the agreement, recipients shall submit a final: (1) SF-269/SF-269a Financial Status Report, (2) final program performance report, and (3) other specific reports that may be applicable to the agreement such as property inventories, and patent and invention disclosures.

Audits are preformed by the Inspector General for the overhead rates on the Tribes. In accordance with the provisions of OMB Circular No. A-133 (Revised, June 27, 2003), &quot;Audits of States, Local Governments, and Nonprofit Organizations,&quot; nonfederal entities that expend financial assistance ($500,000 for fiscal years ending after December 1, 2003) or more a year in Federal awards will have a single or a program specific audit conducted for that year. Nonfederal entities that expend less than ($500,000 for fiscal years ending after December 1, 2003) a year in Federal awards are exempt from Federal audit requirements for that year, except as noted in Circular No. A-133.

There are no criteria for selecting proposals for projects awarded under Public Law 93-638 procedures. When needed work is identified, a request for proposal is issued with a statement of work. The Tribe submits a proposal based on the statement of work. Negotiations are held to arrive at a mutually agreed upon Public Law 93-638 contract for award of the project and the costs associated with performance of the work. For any projects that may be identified that are not subject to Public Law 93-638 procedures, specific evaluation criteria will be included in the funding announcements posted on www.grants.gov.

Why This Book Needs to be Read By Every Social Entrepreneur 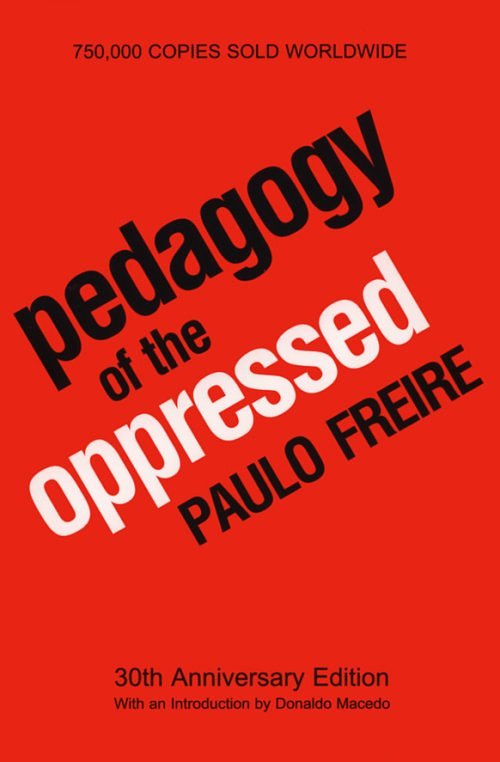 Pedagogy of the Oppressed, a 1970s book by author Paulo Freire, envisions a world not as a given reality, but as “a problem to be worked on and solved.” That mentality is often applied to the greatest social entrepreneurs.