To sustain and strengthen American expertise on the independent states of the former Soviet Union and countries of Southeast Europe, by supporting graduate training; advanced research; public dissemination of research data, methods, and findings; contact and collaboration among Government and private
specialists; and firsthand experience of these countries by American specialists, including on site conduct of advanced training and research.
Grants for this Program

The Department of State strives to create a more secure, democratic and prosperous world for the benefit of the American people and the international community.

The fiscal year 2006 competition closed on January 11, 2006. The call for applications for fiscal year 2007 will be published in the Federal Register in November 2006.

For grants to nonprofit organizations and institutions of higher education with interest and expertise in conducting research and training programs on the independent states of the former Soviet Union and Southeast Europe.

These organizations act as intermediaries for the Federal funds by conducting their own national, open competitions to make awards at the graduate level and above to individual students, scholars or other institutions.

A Fact Sheet on Investing in Young Children

Applicants must be nonprofit organizations or institutions of higher education with an established track record in conducting research and training programs on the independent states of the former Soviet Union and countries of Southeast Europe.

These organizations must run national programs of: advanced research; graduate training; language training; public dissemination of research data, methods, and findings; contact and collaboration among Government and private specialists; and/or firsthand experience of the area by U.S.

Graduate students, individual scholars, nonprofit organizations and institutions of higher education active in the study of the Independent States of the former Soviet Union and countries of Southeast Europe.

Applications must include vitae of professional staff.

Applicants may call the program office with specific questions in responding to the call for applications.

The call for applications is published in the Federal Register. Applications must be prepared and submitted in 20 copies and on diskette in the form of a statement, the narrative part of which should not exceed 20 double-spaced pages. It must be accompanied by a one-page executive summary, a budget, and vitae of professional staff. Applications must be submitted to the program office by the competition deadline.

An Advisory Committee mandated by the legislation reviews the application and rates it according to its responsiveness to the call in proposing a national, competitive program; the organization's established track record in administering a research and training program; its mechanisms for sharing the cost of the program; how it intends to advertise its program to the broad constituency of scholars; how successfully an organization targets individuals most likely to make a career commitment to the study of the region; etc. The Committee makes funding recommendations to the Deputy Secretary of State for approval.

About 3 months following the deadline, the Advisory Committee will meet in public to evaluate applications and make funding recommendations. Assuming the program's funding is in place, the Advisory Committee will forward its recommendations to the Deputy Secretary of State who usually will act on them within one or two weeks. All applicants then are notified by mail regarding their funding status.

Each competition is open and national; applicants are free to apply as often as they wish.

This program has no statutory formula.

Grant recipients have about 3 years to spend their awards depending upon the appropriation legislation. Grant recipients draw down on the grant as needed by requesting funds through the State Department's Program Office.

Grant recipients are required to provide quarterly Program Narrative and Cash Transaction Reports (SF-269) and Technical Performance Reports including, a breakdown of expenditures by county and a semi-annual status of obligation reports (SF-270).

In accordance with the provisions of OMB Circular No. A 133 (Revised, June 27, 2003), &quot;Audits of States, Local Governments, and Nonprofit Organizations,&quot; nonfederal entities that expend financial assistance of $500,000 or more in Federal awards will have a single or a program-specific audit conducted for that year. Nonfederal entities that expend less than $500,000 a year in Federal awards are exempt from Federal audit requirements for that year, except as noted in OMB Circular No. A-133.

Grant recipients are required to keep standard accounting records for 3 years beyond the life of the grant.

Current and past calls for applications, and lists of grant recipients are available from the program office and at the State Department website www.state.gov/s/inr/grants.

Responsiveness to the substantive provisions set forth in the Call for Applications, Part II, Program Information; the professional qualifications of the applicant's key personnel and their experience conducting national competitive award programs of the type the applicant proposes for the study of Eastern Europe and the independent states of the former Soviet Union, and budget, and cost effectiveness. 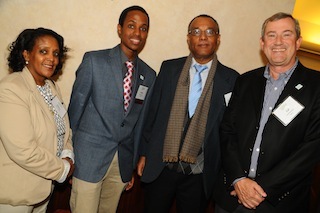 Steve Mariotti, Founder of Network for Teaching Entrepreneurship, writes about Dagim, a high school senior recognized as one of the top young entrepreneurs in America.

Program for Study of Eastern Europe and the Independent States of...