Computer and Information Science and Engineering

To support investigator-initiated research in all areas of computer science and engineering and related fields and contribute to the education and training of future generations of computing professionals, ensuring a supply of qualified technical personnel commensurate with national needs. 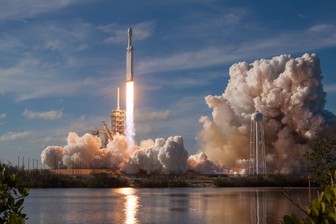 (1) Cooperative Steady-Hand Augmentation of Human Skill in Micromanipulation Tasks: The primary focus of this research is on development of a cooperatively controlled 'steady hand' robot for microsurgery and other fine manipulation tasks, research exploring and extending the steady hand paradigm, and application of the system for prototypical microsurgical tasks in areas such as ophthalmology and otology.

Researchers at John Hopkins University have conceived of and begun prototyping a new class of highly dexterous robotic devices suitable for minimally-invasive microsurgical procedures in the throat and airways, as well as for other precise, multi-handed tasks in confined spaces.

The mechanical architecture of these robots consists of a snake-like unit and a modular detachable parallel unit that attaches at the tip of the snake-like unit.

The parallel manipulation unit uses flexible links to accurately manipulate the payload in a small workspace and eliminates the need for small mechanical joints.

All these features support the down-size scalability of these designs to diameters smaller than 5 mm - a critical dimension beyond which standard designs of snake-like units and parallel robots for payload manipulation becomes extremely expensive and mechanically complicated.

These smaller diameters are needed for many surgical applications.

They have recorded over 100,000 downloads of this software over the past two years.

Of the 12 educational applications ranked by eSchool News, nine were produced under ITR funding at HI-CE.

In effect, HI-CE software enables educators to take handheld computers designed for business and repurpose them for use in K-12.

Under supplemental Research Experiences for Teachers (RET) funding, HI-CE investigators have worked with over a dozen K-12 teachers across the country to develop curricular materials that provide science and math teachers with concrete ways in which to use HI-CE's software on handheld computers.

The group has produced two International Society for Technology in Education (ISTE) published books with two more books in press for 2004.

Moreover, HI-CE software is used in the curricular examples in many books published for K-12 about handheld computers.

From basic research to commercialization, with nationwide, free distribution in between, this effort has demonstrated how a University-based project can &quot;fill the pipeline&quot; with cutting-edge, provocative technology.

(3) Cardiovascular Informatics: Sudden heart attacks remain the leading cause of death in the US.

Since the majority of sudden cardiac deaths occur in people with no prior symptoms, there is an urgent need for computational tools to assist in screening for the conditions that underlie these cardiac events.

Researchers at the University of Houston are developing advanced computer vision technology for a variety of applications, including assisting with the diagnosis of coronary heart disease.

Patients who already present risk factors undergo an intravascular ultrasound procedure that is capable of analyzing in detail any plaques present in coronary blood vessels.

In particular, those plaques that are considered vulnerable (i.e., likely to rupture and cause a heart attack) have been found to encourage the growth of new microvessels in their vicinity.

These microvessels are small vessels and are generally difficult to detect.

However, using the contrast-enhanced intravascular ultrasound acquisition techniquedeveloped by researchers at the University of Houston, evidence of their presence can be detected.

(4) Recovery Oriented Computing: The time required to restart a system after failure continues to be a major concern for systems that must be continuously available.

Safety-critical systems are particularly affected by a lengthy interval for recovery and restart.

Fox has generalized a concept of &quot;recovery through rebooting&quot; to &quot;micro-reboot&quot; individual components of existing applications, significantly improving their availability with no application changes and no a priori knowledge of application structure.

Fox successfully demonstrated that a technique called &quot;statistical-anomaly based failure detection&quot; finds and localizes faults in these applications.

A crash-only system or component can be safely and predictably crashed at any time using mechanisms orthogonal to the component itself, allowing rebooting to be safely used as a recovery mechanism from many fault types.

MINDS is being used at the Army Research Laboratory (ARL) Center for Intrusion Monitoring and Protection (CIMP) and at the University of Minnesota to successfully detect novel intrusions, policy violations, and insider abuse that cannot be identified by widely used signature-based tools such as Snort.

MINDS allows cybersecurity experts to quickly analyze massive amounts of network traffic, as they only need to evaluate the most anomalous connections identified by the system.

Further summarization of these anomalous connections using association pattern analysis helps in understanding the nature of cyber attacks, as well as in creating new signatures for use in intrusion detection systems.

The underlying techniques have applicability in many areas beyond cybersecurity, such as financial and health care fraud detection.

6) New System Up and Running: Nearly half of PSC's brand new XT3 &quot;Red Storm&quot; system, more than 1,000 processors mustering roughly five teraflops of capability, was installed and humming in PSC's machine room in time to bring in 2005.

This is the first installed system of the Cray, Inc.

The XT3 architecture is based on the &quot;Red Storm&quot; system developed at the Sandia National Laboratories.

The PSC system will soon provide 10 teraflops of capability for NSF science and engineering research and education.