The central Pacific Coast of the United States is one of the few places in North America where rain and snowfall exhibited major prolonged shifts between wet and dry conditions during the last century. 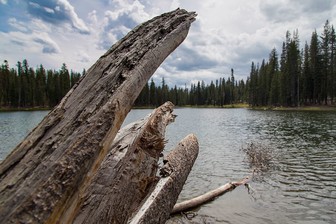 How's Your Community Doing?
Check Out it's
Community Vital Signs
within the Sacramentoï¿½San Joaquin River system, which demonstrates that this behavior exerts a major influence on regional hydrology and water resources.

By focusing on three critical systems - forest fire activity, tree establishment and mortality and alpine hydrology - this research has the potential to provide insights that will be directly relevant to long-term planning and management in the Klamath Network parks.
Related Programs

Additional Information of Eligibility:
This is a "Notice of Intent" of a single source task agreement award to University of Minnesota, Minneapolis, MN under the Great Lakes Northern Forest Cooperative Ecosystem Studies Unit (CESU).

This assistance award is justified because this cooperator is uniquely qualified to perform the activity based upon a variety of demonstrable factors including their past research and familiarity with the resources in the area and their technical expertise.

The PI is a broadly trained and versatile dendrochronologist with experience and training that spans a wide array of disciplines and research interests.

The PI was selected due to the extensive experience and knowledge in reconstructing fire regimes and linking disturbances with climate patterns.

A main aspect of the PI research investigates the dynamics of forest ecosystems in the western United States.

Moreover, the PI has abundant experience in linking changes in climate with shifts in disturbance regimes and associated changes in vegetation patterns that is critical to disentangling the factors influencing demographic and disturbance changes in forested ecosystems.