Project Goals Designed to support the priorities of the Secretary of the Department of Interior, this project will create jobs in the American economy, particularly important for underserved remote rural areas such as White Pine County, Nevada.

This project will create scientific information 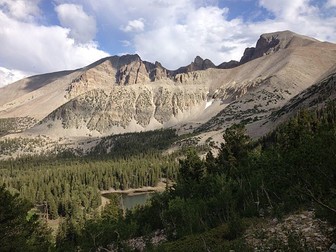 How's Your Community Doing?
Check Out it's
Community Vital Signs
necessary to identify and implement best practices for management of bats and sagebrush ecosystems.

Funding for this project was obtained to proactively prevent listing of bat species, which are threatened by white nosed syndrome, and sage grouse, threatened by loss of sagebrush habitat.

The sagebrush restoration portion of this project reduces competition for grazing resources by increasing perennial grasses and reducing conifer cover.

Although livestock is not permitted in the park, the improvement in range conditions will allow non-livestock grazing animals to use the park, thus reducing competition for forage outside the park.

Inherent in this project are close relationships and partnerships with federal and state agencies, such as Bureau of Land Management, US Forest Service, and Nevada Department of Wildlife.

This cooperative, partnership based approach leverages funding across administrative boundaries to increase efficiency, scope of inference, and the return on investment for the available funding.

Bats are vital to ecosystem functioning.

Believed to have been introduced from Europe, isolating and documenting the spread of white nosed syndrome are critical objectives for biologists managing caves and bat populations.

Public outreach is also critical to inform park visitors about their role in preventing the spread of WNS.

In conifer dominated woodlands, the majority of plant biomass is sequestered as unpalatable cellulose or lignin, which is unavailable to most animals as food.

The mission of Great Basin National Park is to â¿¿protect a representative portion of the Great Basin region for current and future enjoyment and scientific understandingâ¿.

This protection extends to healthy and resilient sagebrush and wetland ecosystems and components of biological diversity, such as bats, with are critical to maintain ecosystem functioning, goods and services.
Related Programs

Sarasota to Get Homeless Veterans Off the Streets

Additional Information of Eligibility:
Please refer to the PSI for further information.