Mesa Verde, Spanish for green table, offers a spectacular look into the lives of the Ancestral Pueblo people who made it their home for over 700 years, from AD 600 to 1300. Today the park protects nearly 5,000 known archeological sites, including 600 cliff dwellings. These sites are some of the most notable and best preserved in the United States. 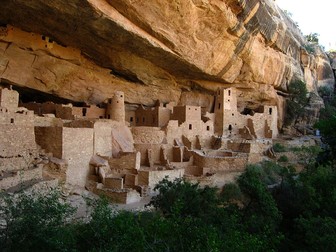 This collaborative agreement between the University of Colorado at Boulder and the National Park Service - NPS will assist Mesa Verde National Park - MVNP with planning, design, and development of...more
Posted On - 2019-07-29

According to the National Interagency Fire Center, more than 75 million acres of land were affected by wildland fires from 2007 to 2017. Wildfires pose a threat to cultural resources including both...more
Posted On - 2019-07-01

This collaborative agreement between the University of Colorado at Boulder and the National Park Service (NPS) will assist Mesa Verde National Park (MVNP) with planning, design, and development of...more
Posted On - 2019-03-25

Chapin Mesa Archeological Museum dioramas, created in the 1930s by the Works Progress Administration (WPA), are a major attraction for visitors and are well-known and admired for their amazing...more
Posted On - 2018-08-30

Surveys are needed to determine the geographic extent, current viability, and long-term trends of rare plant populations in Mesa Verde National Park (MEVE). Many areas of suitable habitat have yet to...more
Posted On - 2016-04-20

How Charitable and Commercial Purposes Can Partner to Create Common Goals