To supplement and expand ongoing efforts to provide shelter, food, and supportive services for needy families and individuals.

To strengthen efforts to create more effective and innovative local programs by providing supplemental funding for them.

To conduct minimum rehabilitation of existing
mass shelter or mass feeding facilities, but only to the extent necessary to make facilities safe, sanitary and bring them into compliance with local building codes.
Related Programs

Some local providers have used EFS Program funds in the following ways: (1) A drop-in center, available for homeless individuals during daytime hours when shelters are closed, used EFS funds to begin a lunch program; (2) A family shelter used EFS funds to increase the quality of the diet available to mothers and children and added a morning meal; (3) A shelter used funds to purchase additional cots and beddings, and thus increase shelter capacity; (4) A food bank used EFS funds to increase the amount of food and the protein quality it distributed to its pantry system; and (5) A shelter organization used EFS funds to make one-month mortgage and rent payments to prevent evictions which kept families in their own homes and lightened the shelter population.

During the most recent phase for which final data is available (phase 24 or FY 06), over 12,000 social service agencies (both nonprofit and governmental) in more than 2,500 jurisdictions received nearly $151,470 million. This resulted in the provision of more than 66,784,162 million additional meals and 4.1 million additional nights of shelter, payout of approximately 248,869 rent/mortgage and utility bills to keep people in their homes, as well as supplies and minimal repairs for shelters. Web training, called Webinars, was also conducted by program staff for local boards and agencies.

Food and related expenses (such as transporting food/food preparation and serving equipment); mass shelter; other shelter (such as hotels and motels); and rent/mortgage and/or utility assistance limited to one month; and limited repairs to feeding and sheltering facilities.

Emergency Food and Shelter (EFS) National Board Program funds cannot be used for: rental security, deposits of any kind, cash payments of any kind, lobbying efforts, salaries (except as administrative allowance and limited to that total allowance of 2 percent of total award), purchases or improvements of an individual's private property, telephone costs, repairs to government-owned or profit-making facilities and any payments for services not incurred.

For a complete listing on eligible and ineligible costs under this program, refer to the current Phase (fiscal year): Responsibilities and Requirements, issued by the Emergency Food and Shelter Program National Board.

Contending Heroes for the Social Enterprise Champion of 2013

What\'s in the Federal Budget 2014 for Women and Families?

Since funds are initially distributed to jurisdictions based on either a National Board formula or recommendations from State Set-Aside Committees, there is no application process for jurisdictions.

The law directs that the Local Boards, which manage the program at the local level, shall &quot;determine which private nonprofit organizations or public organizations of the local government in the individual locality shall receive grants to act as service providers.&quot; The range of local participant groups includes the affiliates of the National Board membership which consists of the American Red Cross, Catholic Charities, USA, United Jewish Communities, National Council of Churches of Christ in the USA, The Salvation Army and United Way of America, with a local government representative replacing FEMA. Also participating are thousands of independent nonprofits (such as Community Action Agencies and Food Banks and food pantries) which provide food and/or shelter services. Due to the broad category of people in need of such emergency services, the providers can include specialized groups such as domestic violence shelters, Native American organizations, organizations providing food or shelter to: AIDS patients, handicapped individuals, the elderly, homeless veterans, non-wards of the State teenage runaways, and many other groups with emergency food and shelter needs. As noted earlier, the decisions on selections are made through the consensus of the Local Board as they have assessed their community's most urgent needs. It is important that such agencies use these funds to supplement, not replace, their current efforts. This program is intended to supplement ongoing programs and allow them to extend and expand upon their existing services.

The program employs a Local Recipient Organization Certification Form. This form certifies an applicant's status (i.e., that it is a nonprofit capable of delivering eligible services) that it will abide by the program guidelines (both on eligible spending and reporting requests), and comply with other fiscal and program rules so stipulated. Grant awards will be determined in accordance with OMB Circular Nos. A-102 and A-87 for State and local governments. Awards made to Institutions of Higher Education, Hospitals and Other Non-Profit Organizations will be required to follow the requirements of OMB Circular Nos. A-110 and A-21, and be audited under the standards of OMB Circular No. A-133.

At the local level, following award notification, a Local Board is formed.

That board then advertises the availability of the funds to local nonprofit agencies and governments.

Refer to program guidance for information on the appeal process. Those cases that cannot be handled locally should be referred to the National Board giving details on action that has been taken up to that point. Any allegations regarding fraud or the misuse of funds should be referred directly to the FEMA Office of Inspector General.

Not applicable. Each phase (fiscal year) is a new program.

Local Boards are expected to monitor the expenditure of funds in their respective jurisdictions.

It is for that reason that requests for second checks (all awards are divided into two payments) must be made by the Local Boards.

Along with the request for the second payment, the National Board receives an interim report on eligible spending during that phase.

A Final Report also must be filed by each LRO with its Local Board.

The Local Board then compiles all the Final Reports within its jurisdiction and submits them (along with any requested documentation) to the National Board.

Failure of an LRO to file a Final Report will result in its award being held in escrow the succeeding year.

Boards are required to remain in operation until all program and audit requirements of the National Board have been satisfied. Grant records shall be retained for a period of 3 years from the day the recipient submits its final expenditure report. If any litigation, claim, negotiation, audit, or other action involving the records has been started before the expiration of the 3-year period, the records must be retained until completion of the action and resolution of all issues which arise from it, or until the end of the regular 3-year period, whichever is later. Grant records include financial and program/progress reports, support documents, statistical records, and other documents that support the activity and/or expenditure of the recipient or sub-recipient under the award.

Santa: Why a Social Enterprise Creates Jobs for Unemployed Elves 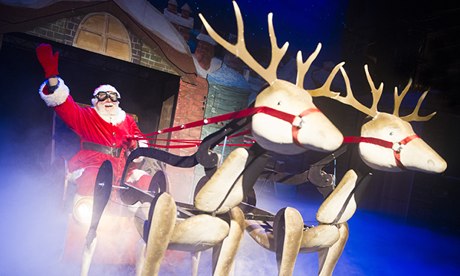 Santa, or Father Christmas, discusses why a social enterprise model was the ideal solution to create job opportunities for unemployed elves.